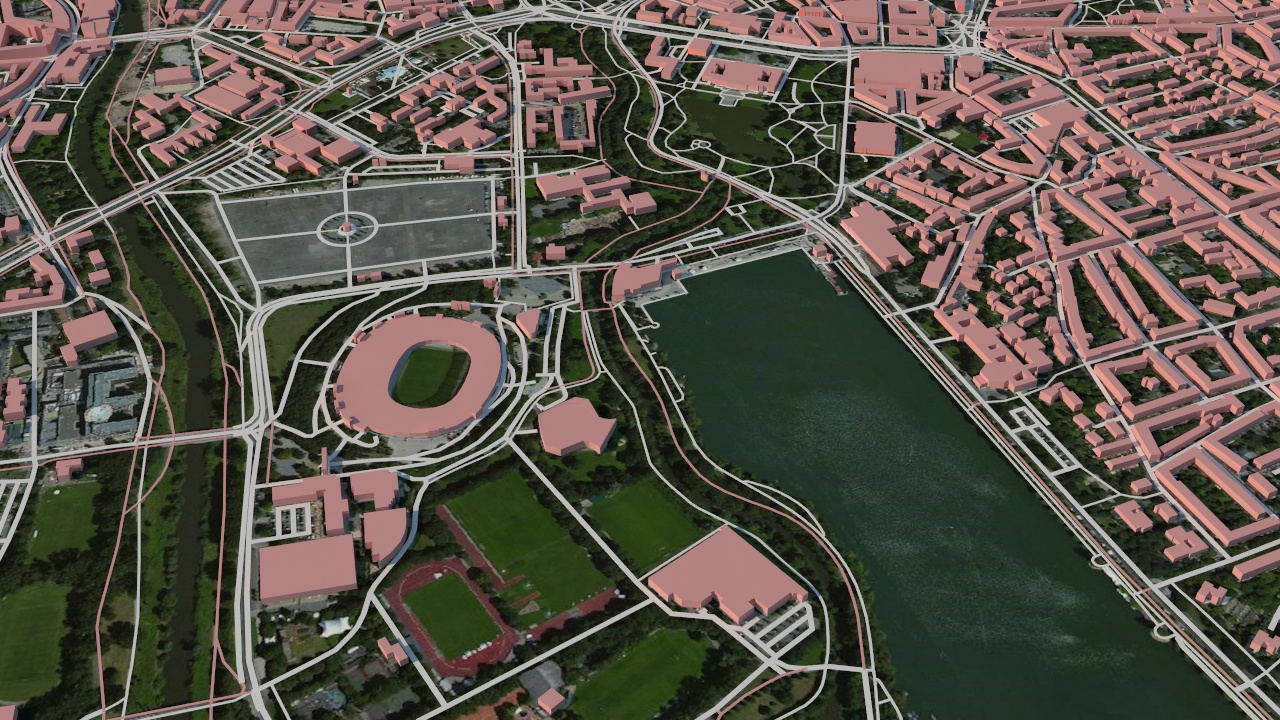 I’ve been doing a lot of work on my mapping script. I’m calling it MapMax for now. Last time I could download openstreetmap data and style it into 3D objects for rendering. Now I’ve added support for multiple map projections and added raster maps. Check out the video.

Map projections are very similar to unwrapping a sphere in 3dsMax. There are many ways to do it and any unwrap/projection has some kind of distortion. The projection we’re all very used to seeing is the mercator projection. It’s the projection used in every online map such as google or bing. However it distorts heavily. When you want to make a render of a building you’ve modeled on a map, you need the map to fit with you building. That’s why I’ve added the transverse mercator projection. This one distorts hardly in smaller areas, such as cities. I’m planning to add more projections, also for global maps.

Wouldn’t it be great to put your 3D model on a map image? Of course! I’ve added support for raster image download. At the moment you can pick from Bing and openstreetmap raster tiles but more are to follow. Integrating your models in an environment couldn’t get any easier. Besides that, the map images are also reprojected to fit with any type of projection you pick.

I’d like to add some more features before releasing the script. I’m thinking about shapefile support. Especially the shapefiles from natural earth. I also want to add some more map projections and raster tile providers. Also I’d like to be able to filter the openstreetmap data before I download it. This should avoid lengthy downloads of full datasets when I only want the buildings or another aspect of an area.

Join the discussion and tell us your opinion.

Hello Klaas, I am just looking how you are doing on your GIS script, are you planing to implement some kind of vertex coloring option, and also some kind of height maping for the terrain and also buildings? , by greyscale or vector color , or both and in some way something easy to reassign a texture on it …Wish you luck, it looks so easy to code for you! 🙂

Klaas Nienhuisreply
– In reply to: kali

Thanks Kali.
I think height and vertex mapping for the terrains seems appropriate. I’m not sure about height mapping the buildings. Could you tell or show what you mean by this?
I really like to program, but especially this mapping stuff is not very easy, believe me!

What a great script! Awesome!
When will it be ready (for sale)?
I could really use for the next couple of projects. I don’t know if you do “pre” sales of Beta’s?
Best regards.

Another question; How does it handle height data? Or isn’t that implemented?
Thanks again.

Klaas Nienhuisreply
– In reply to: Toni

Hi Toni, thanks a lot for the interest. Alas, I can’t give any release date yet. This is a sideproject at the moment, but I’ll definitely keep working on it because of the interest. This demo doesn’t implement height data but I’ve already got that set up as well. I’ve written three tutorials on my site about handling srtm height data. I’m going to implement that in a modified form.
The downside of srtm data is that it’s very low-res. Do you have other height data in mind you’d like to use?

To bad to hear there is no release date.If your interested in selling; you know my email address.

I was just thinking about the google earth height data (that’s srtm, isn’t it?).
I normally use google-earth via sketch-up to 3ds max. Lots of tutorials about that, but not nearly as nice as your plugin. Looking forward to the updates and the release! 🙂

Could it be possible to use JOSM or other external editor for osm downloading and editing? Just import cropped and filtered .osm file to the script from the editor.

Hi Jukka, that’s a great idea. Do you have a sample of such an edited file? I can build support for loading such a file from disk instead of downloading it.
What kind of editing would you do before downloading? Filtering out elements you don’t need, or something else? I don’t have experience with these editors so I’m curious to hear.

will this plugin be available for download or purchase ?

Hi Chris, yes: it will be for sale once the beta has finished (and started first!)

Hi, great work!
When do you think you can distribute the script?
I am currently working with an object where your script could save plenty of time.

Hi Timofej, I’m working on the documentation at the moment and I’ll add you to the mailinglist. If you have a specific location in mind I can make a map for you in return for your feedback and a nice image! Just send me the location and a size of the area.

Hi, It would be fantastic if you could help me with this. I am preparing a video where I need to create quite a larger area of St. Petersburg. It would be best if I make a screen of the area and send you by mail. What is your e-mail address?
I will definitely share the result and tell about you to Russian internet community as it is a great thing you are doing. I think this plugin will become irreplaceable in architecture visualization sphere!

Timofej, I’m counting on your help to make this script a huge success!
You can make a screenshot of the area or give me a geolocation with a width and height of the area. You can send it to me through the contact form at the bottom of this page.

please can you give me that script
or how to download it?
i want site of my graduation project, site for “hama” city at “syrian arab republic”

Hi Ali Ghali, mapmax has evolved greatly and has transformed into Maproom. You can get it here: https://www.klaasnienhuis.nl/wp/product/maproom/. You can download it for free, or purchase a license to get access to extended functionality.

This site uses Akismet to reduce spam. Learn how your comment data is processed.